Several years before he made contact with me in 1997, Charlie Baker had been approached by an author whose interest was the conversion of merchant ships for war service. They met several times, but to Charlie’s great disappointment, the book was never published. The next few pages are his anecdotes and memories of his time in HMS Ausonia which he had recorded for the author and give an insight into the role this ship played in the final years of the war. 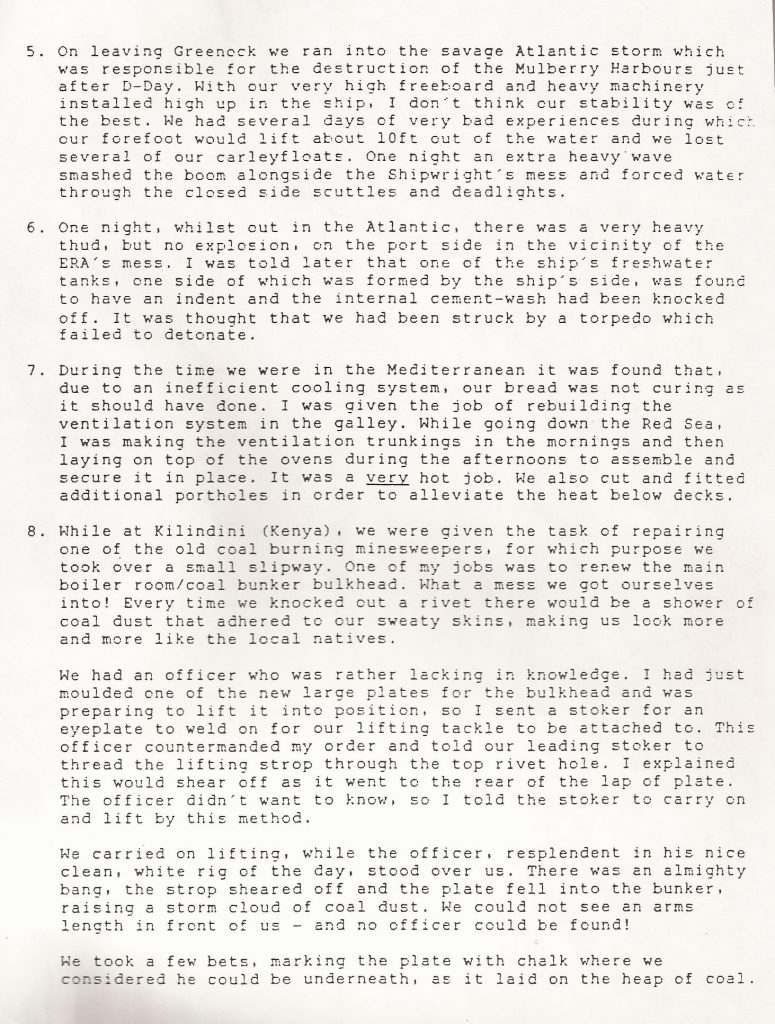 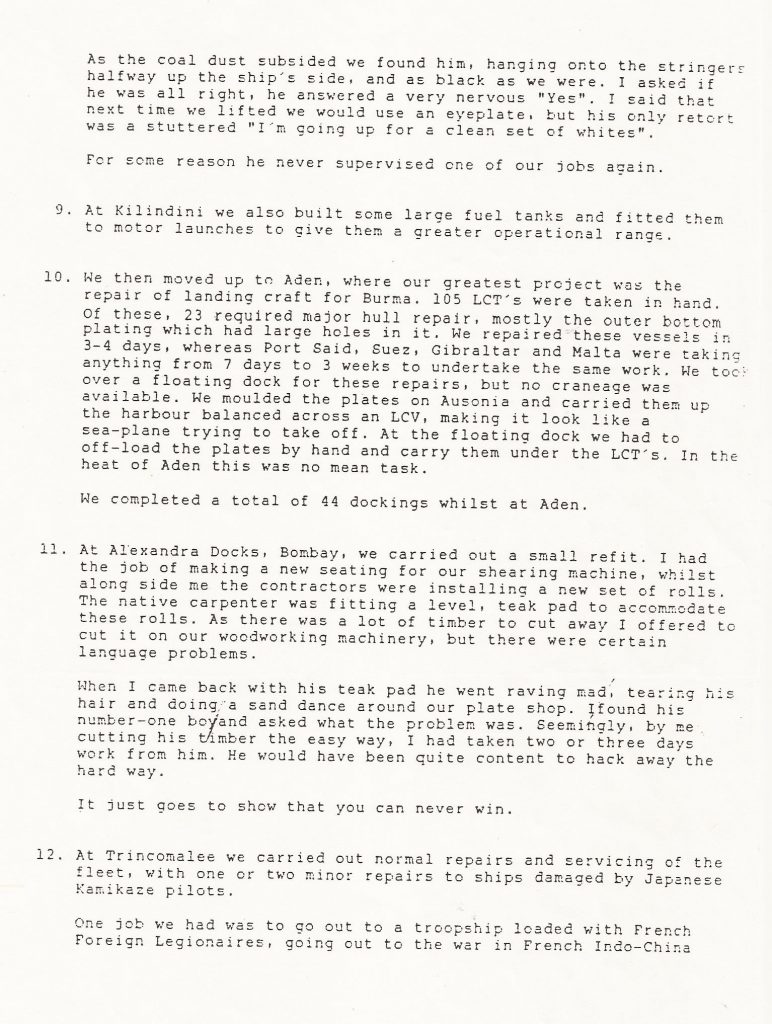 Along with general information on HMS Ausonia, Charlie gave me a copy of the first years report for the new Fleet Repair Ship, HMS Ausonia, which he had kept as a souvenir. The report covers the period from her commissioning on May 2nd 1944 to May 2nd 1945 and is titled “A statistical record of a year’s service, work and sport” and includes many interesting facts about the life onboard this ship. 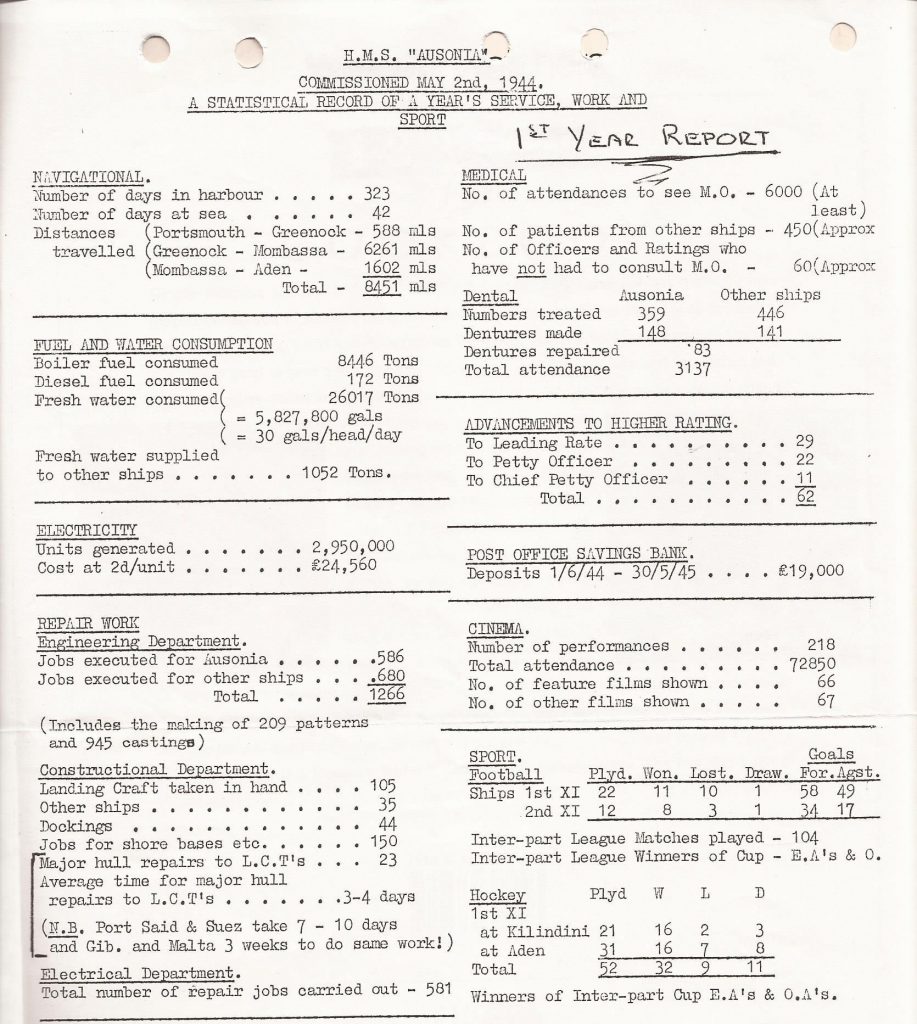 Ron Ryder created this “Memories of Navy Life” along with his photographs from his time on HMS Ausonia. Some of the photographs are also in the HMS Ausonia Artefacts page as they include photographs of the ship and crew. 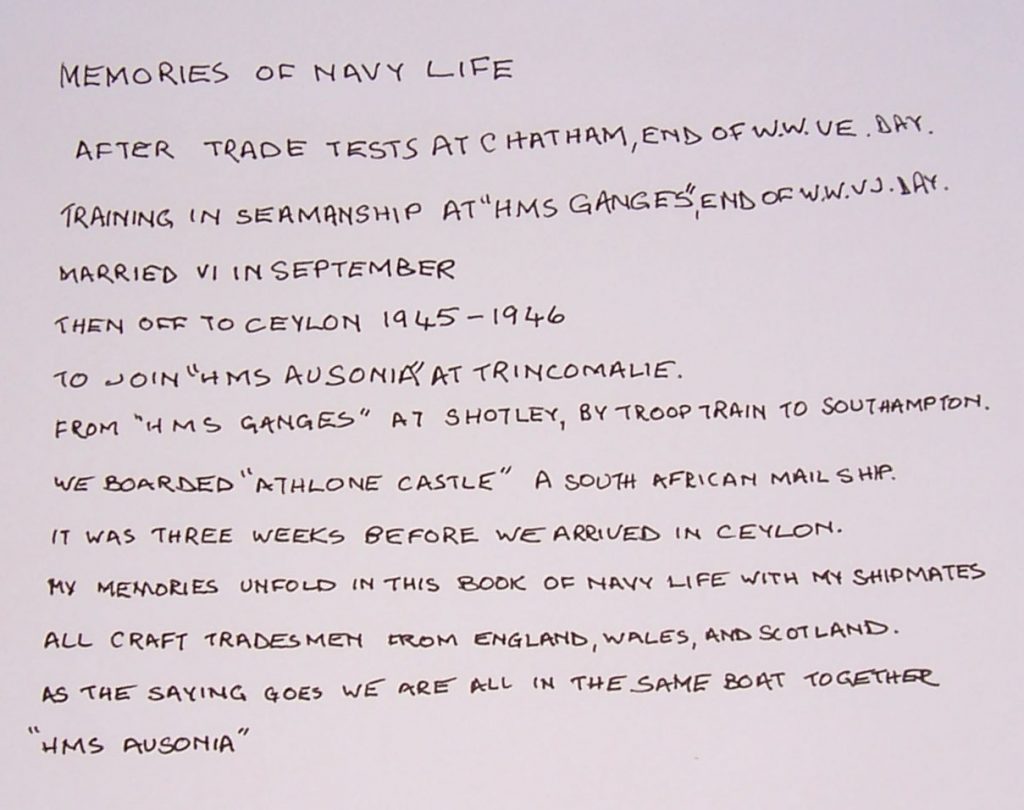 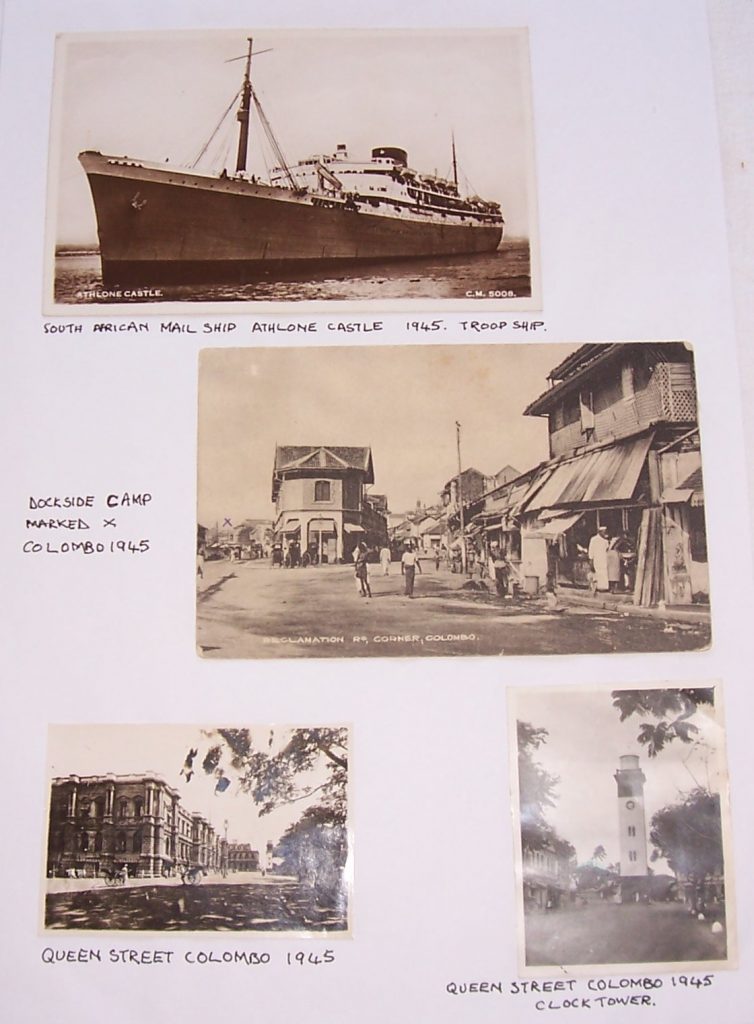 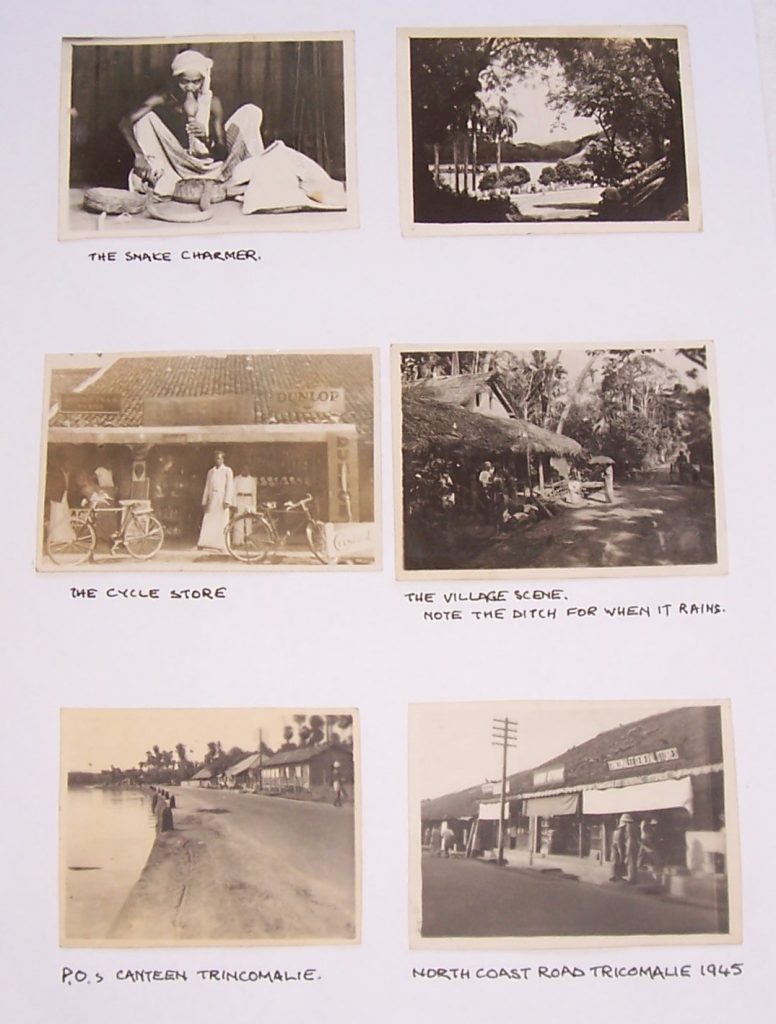 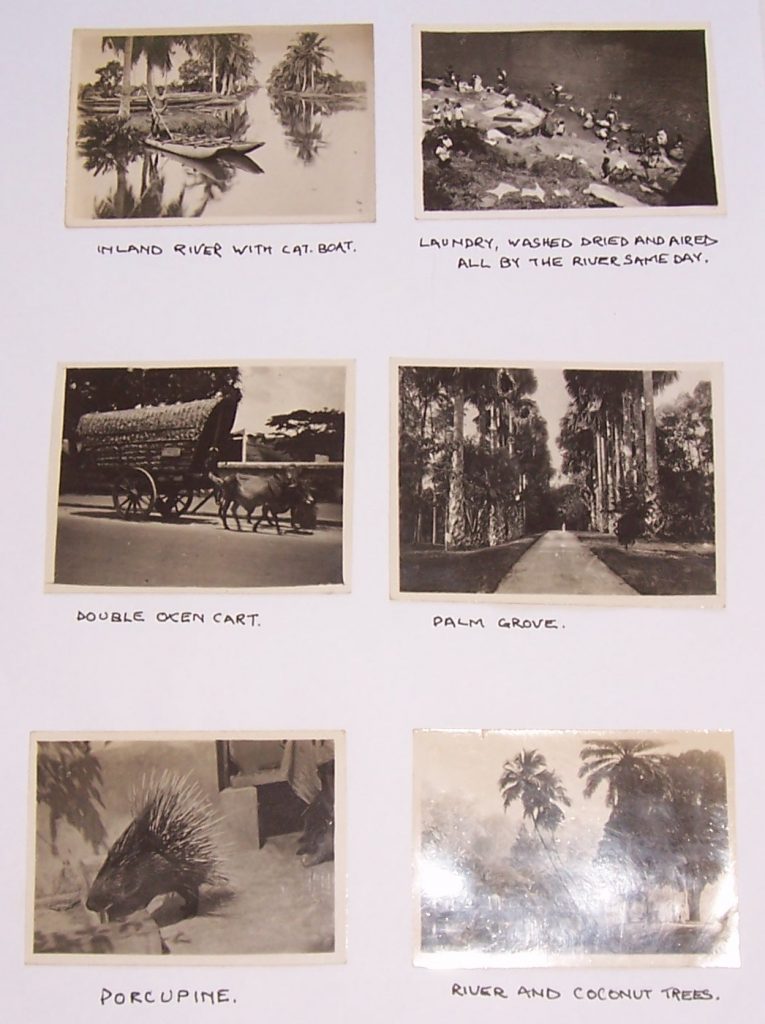 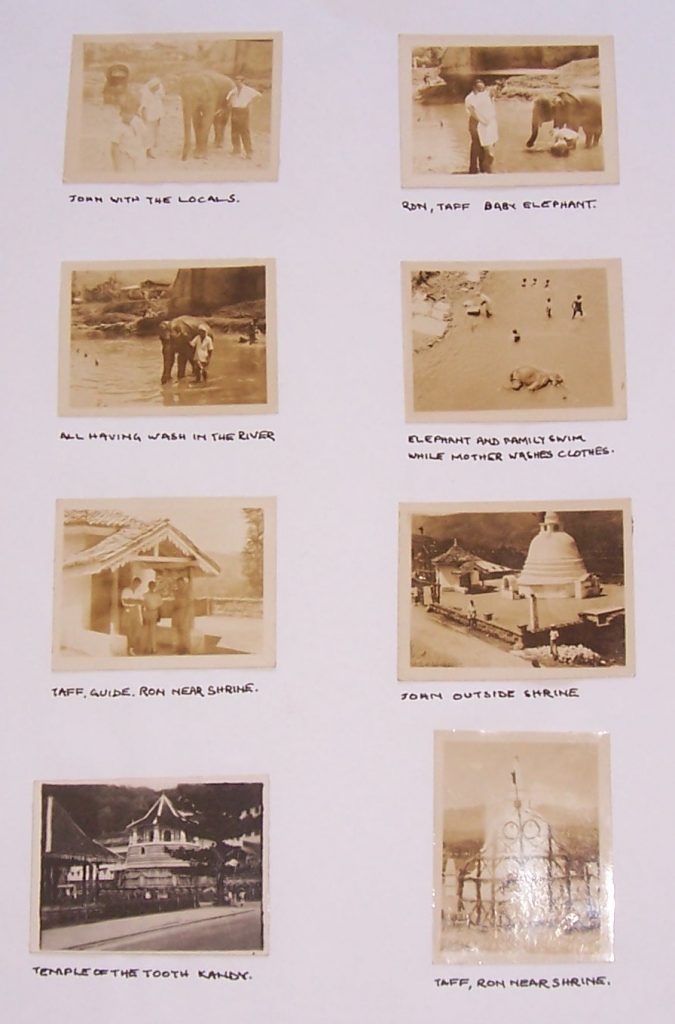 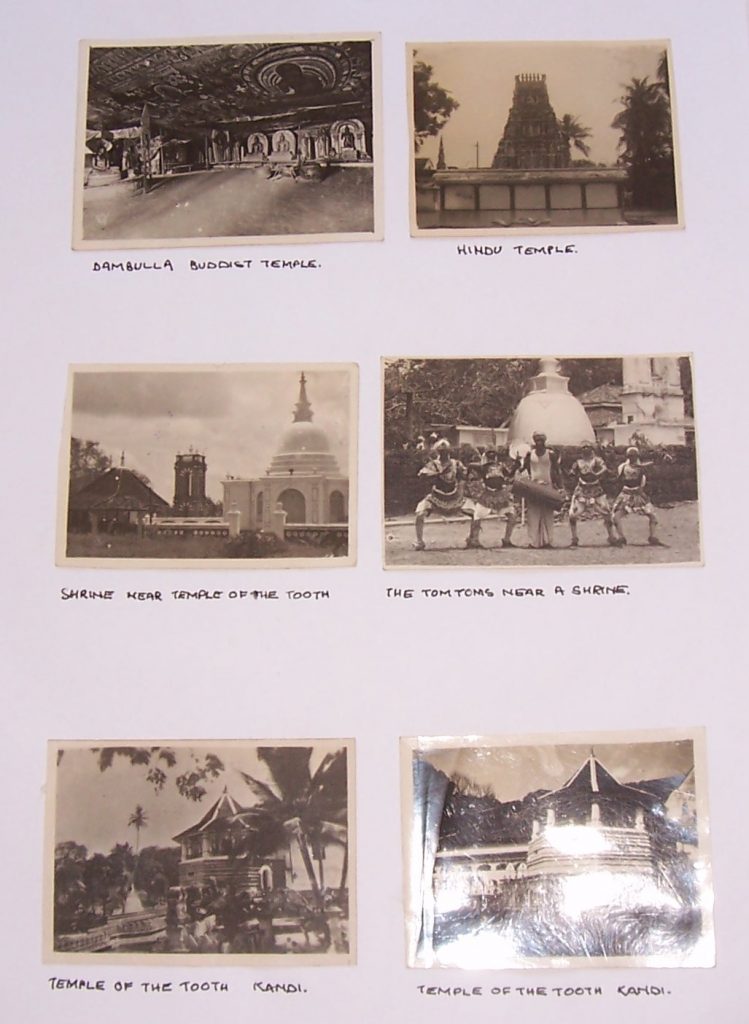 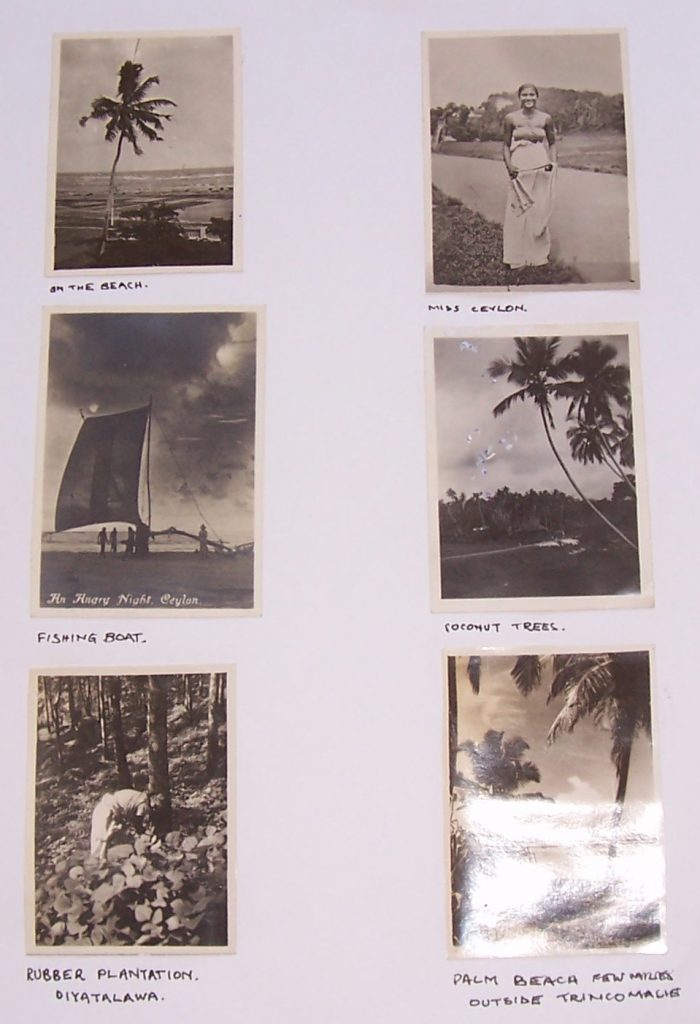 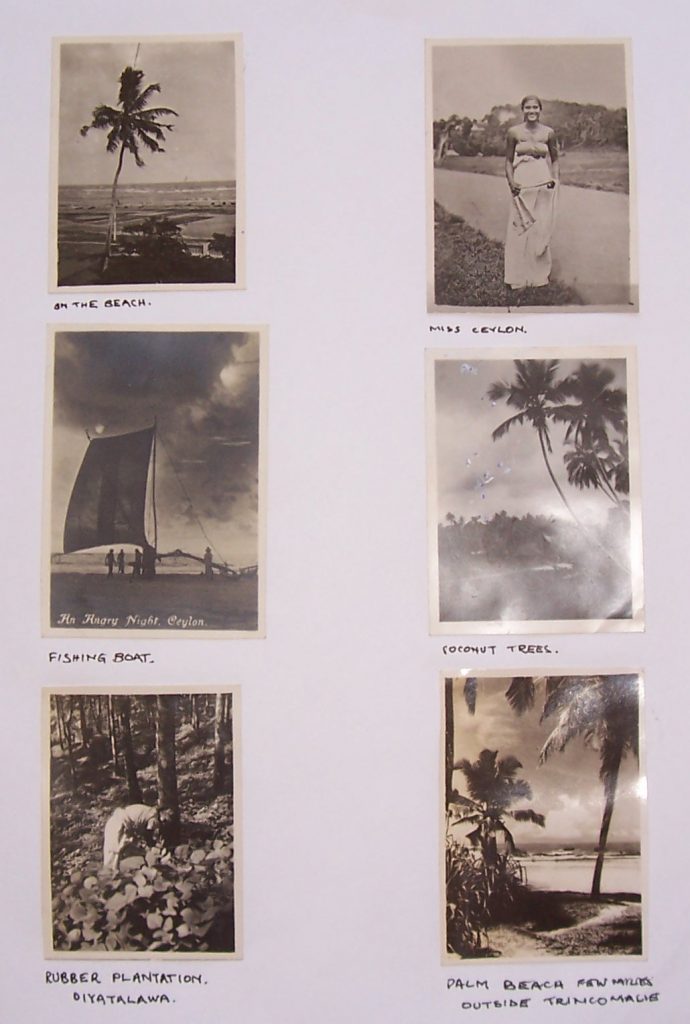 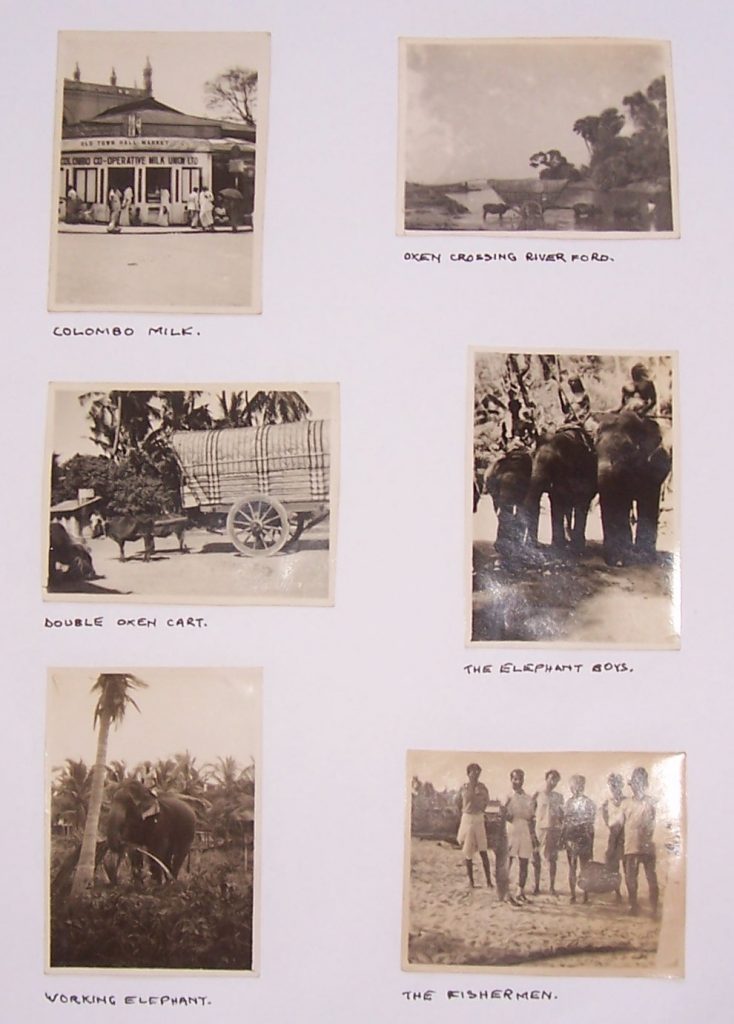 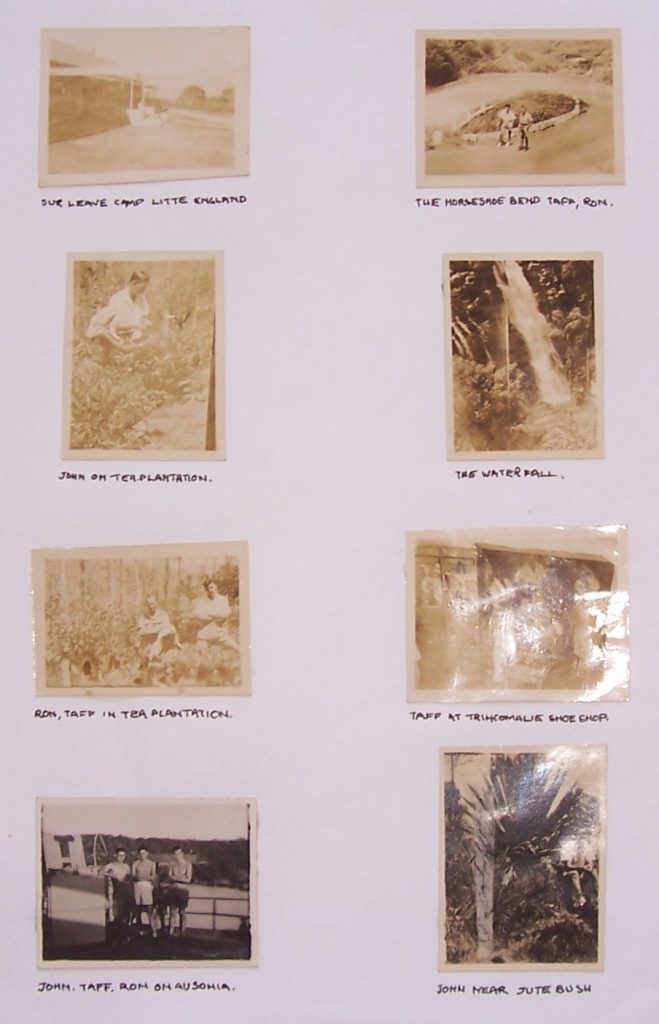 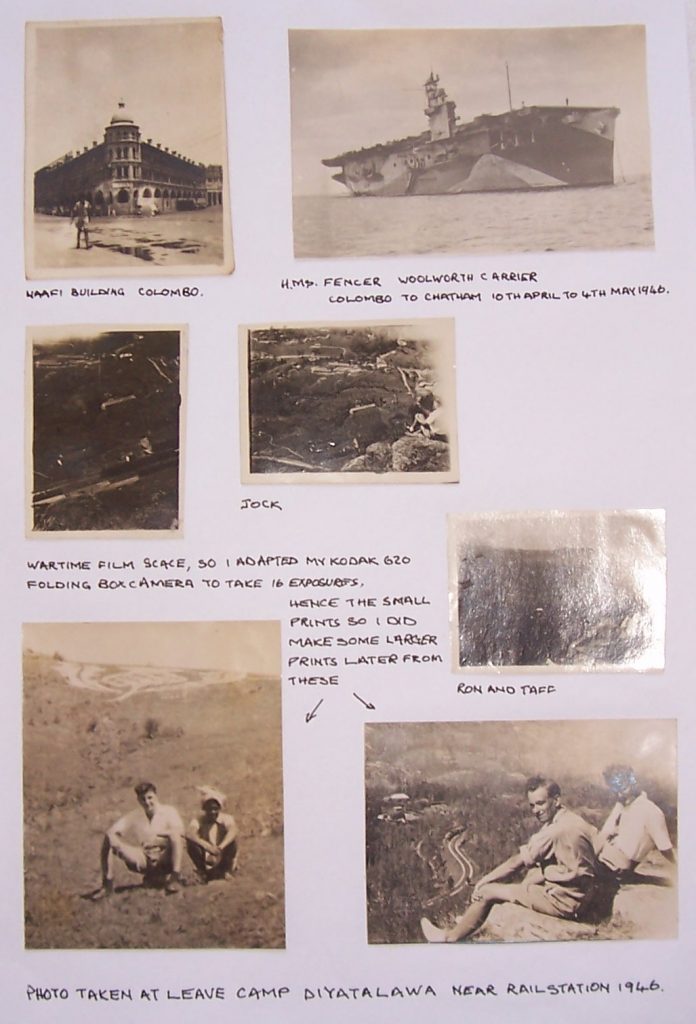 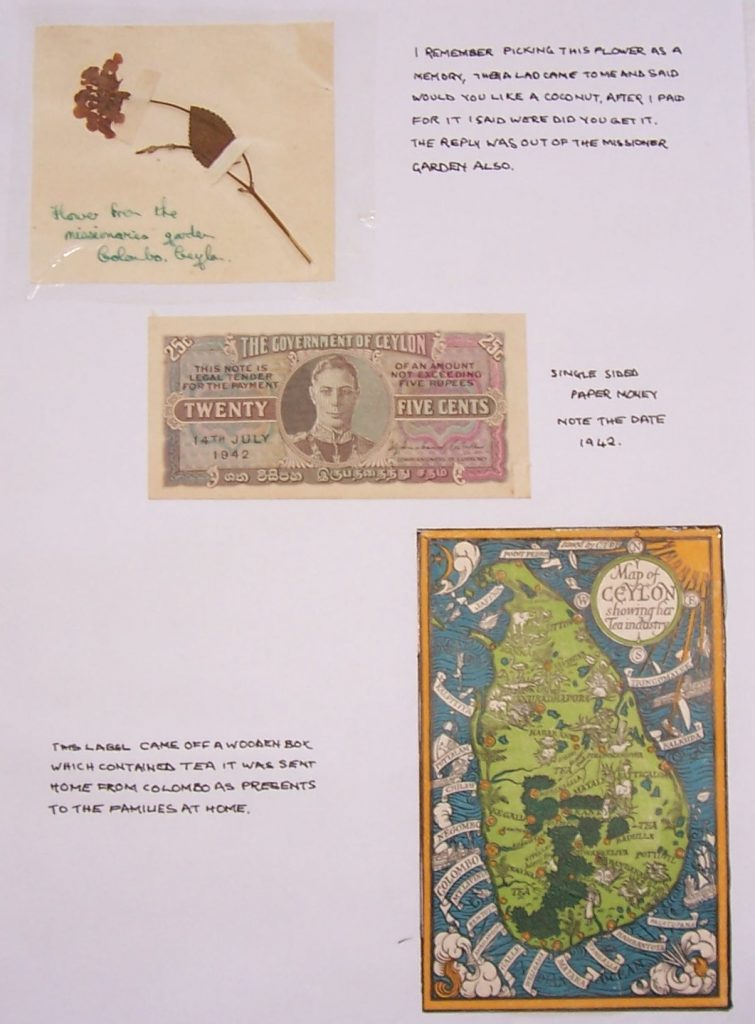 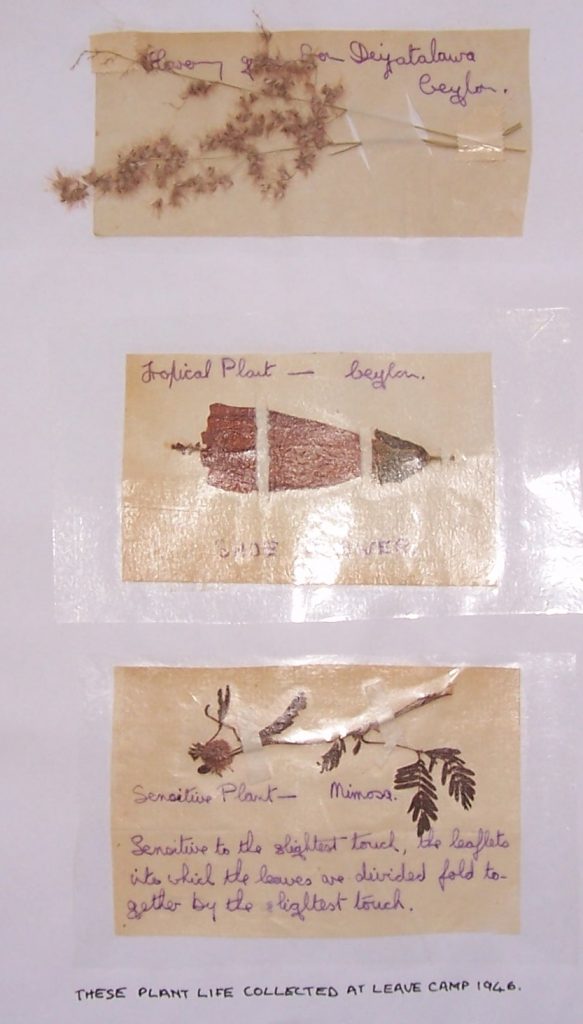 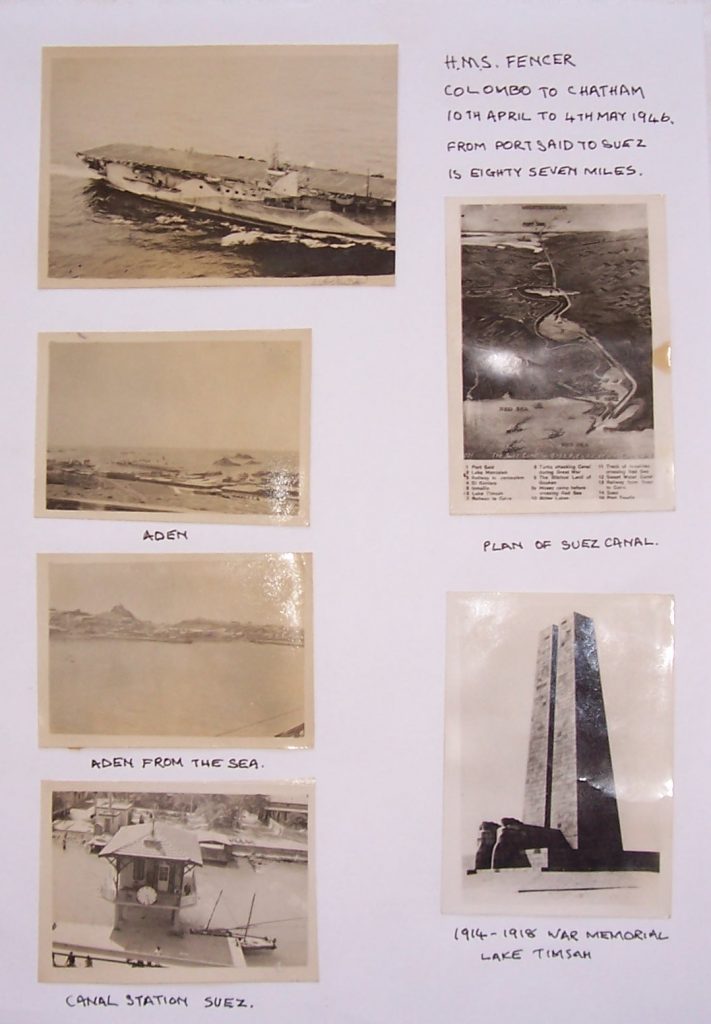 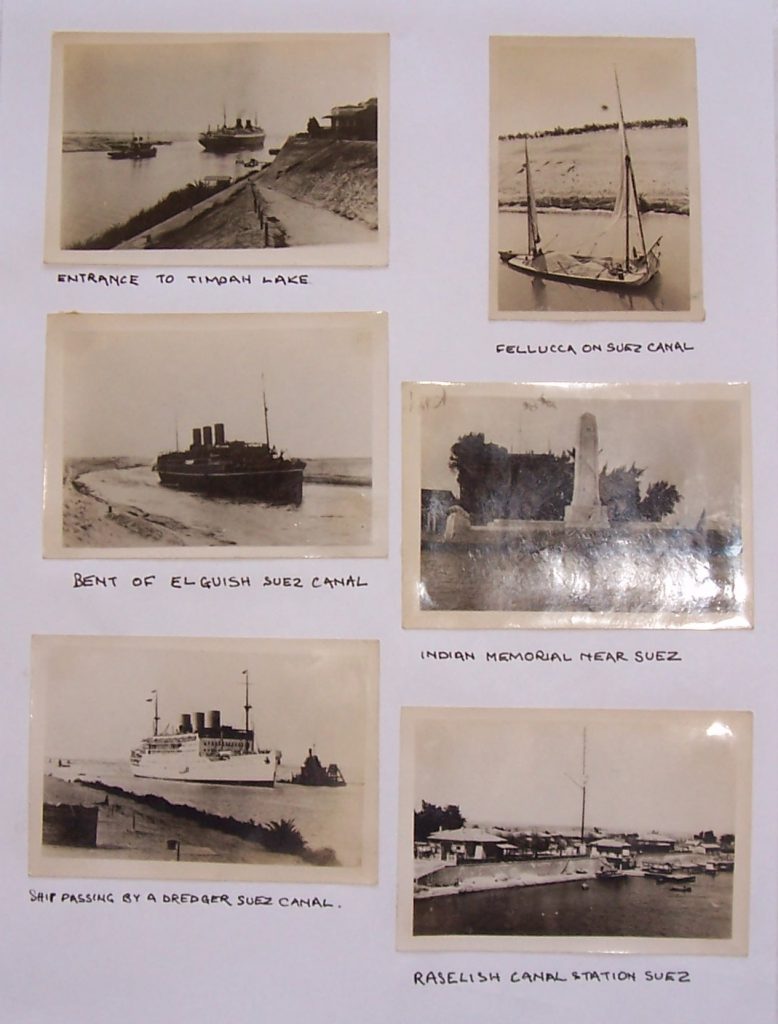 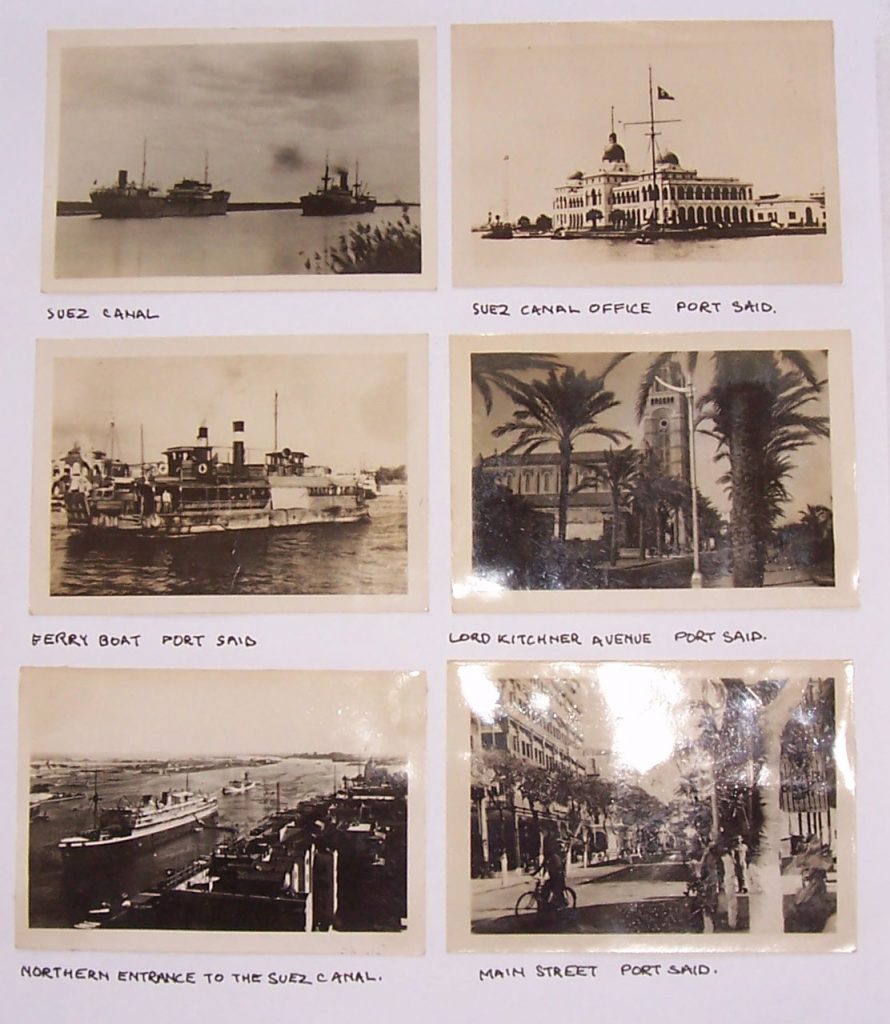 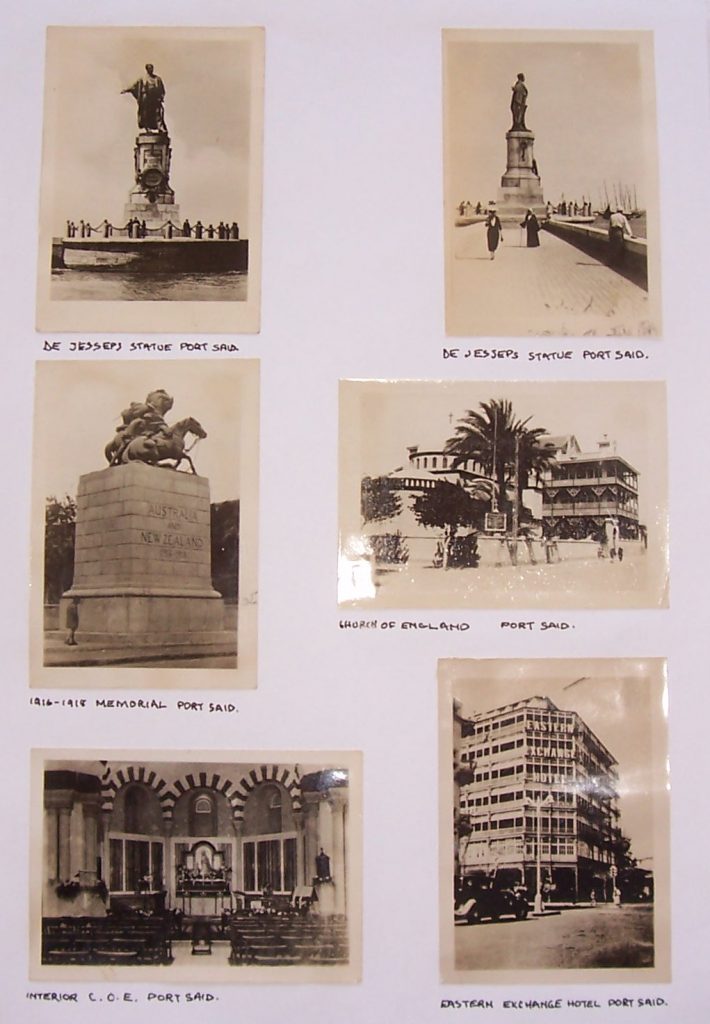 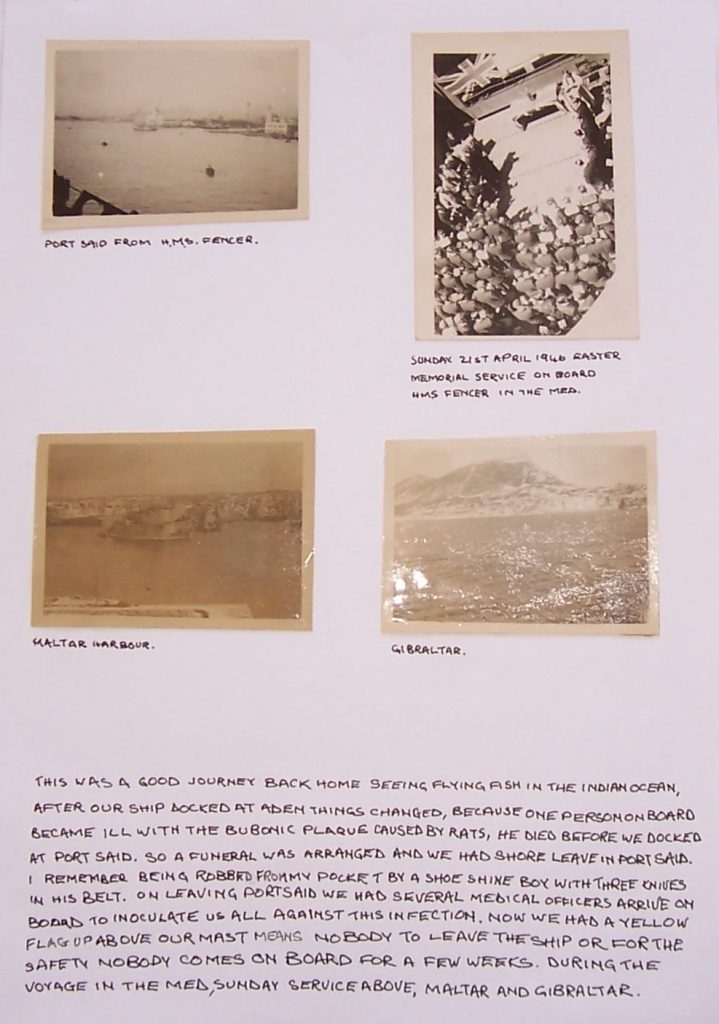 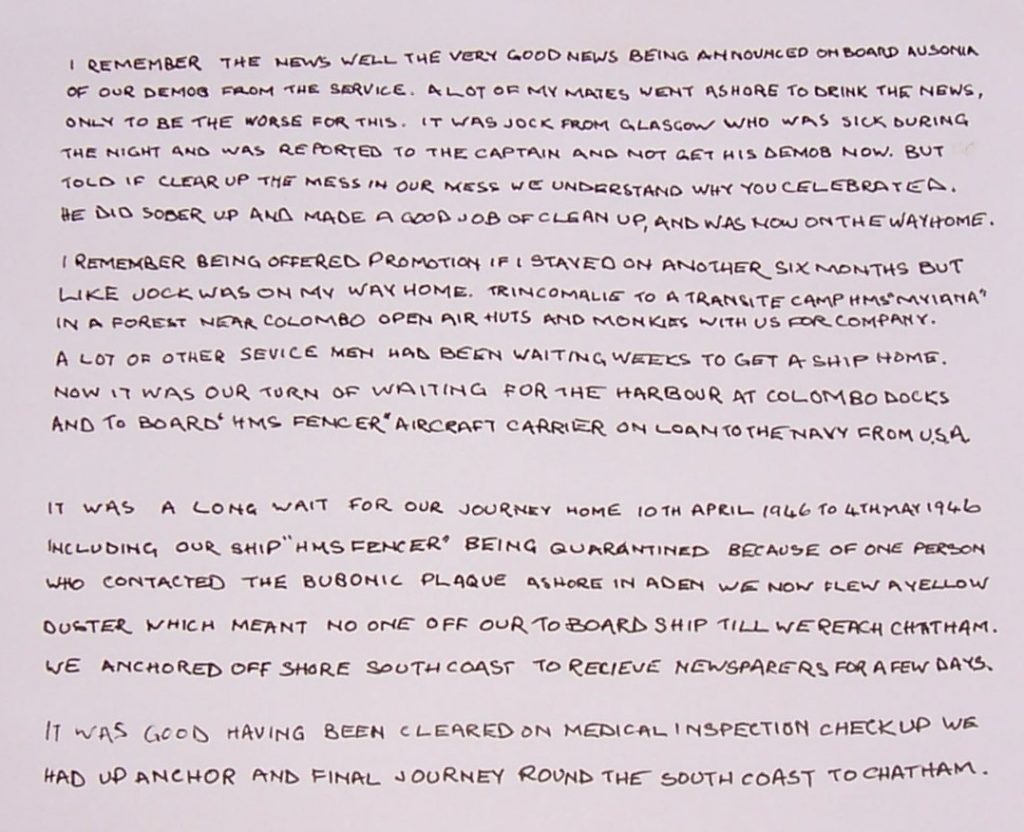 In 2003, Ron was interviewed by the Cambridge Evening News as part of the VJ Celebrations and the following article, titled “Rum do…riddle of disappearing rations” appeared on the 7th May. 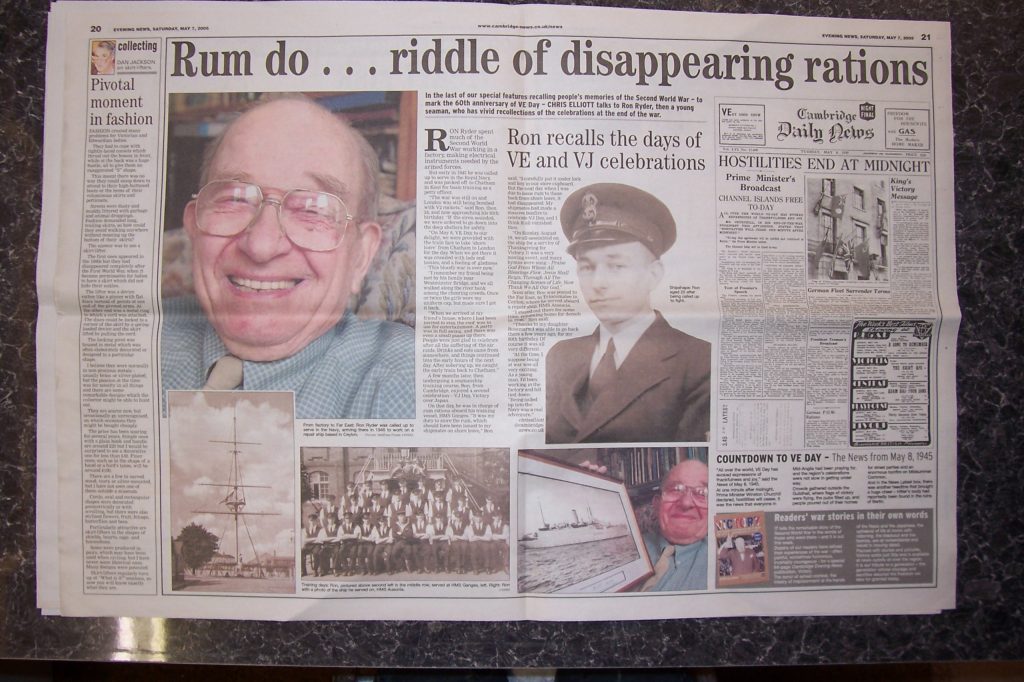 My thanks to Kevin Forster who contacted me regarding his wife’s grandfather, Henry (Harry) Clark, who served on HMS Ausonia when she was engaged in her heavy repair ship role. Harry was a plater by trade and in his later years was employed in the Thompsons Shipyard in Sunderland.

Amongst their prized possessions is Harry’s crossing of the equator proclamation, which is dated 10th July 1944. Kevin remembers Harry speaking of Aden, the repairs to landing craft and how they would give their cigarette ration to the local labour force. Harry also had a great respect for Lord Louis Mountbatten, who he met at a social function, but it is unknown if this was aboard Ausonia or at one of the shore bases. Louis Mountbatten was the Supreme Allied Commander of the Southeast Asia Theatre and it was his command that oversaw the recapture of Burma from the Japanese and therefore HMS Ausonia would have been under his command.

My thanks to John ‘Buster’ Browne who contacted me after visiting the HMS Ausonia web site, “seeing the pictures of her certainly brought back memories of the old girl”.

HMS Ausonia was John’s first draft after finishing his training at HMS Ganges and HMS Mercury in 1963. He was drafted to HMS Ausonia, (then based in Malta), with three of his classmates as JROs (Junior Radio Operators) in 1963. He recalls that the short time that he had on her was a great time and being only 17 years old, Malta was a different place at the time for him. He remembers that being his first ship, he learnt a lot in a short space of time.

John and his three mates were also lent to the mine sweepers of the 7th MS Squadron for  both sea time and the experience as Radio Operators. Besides being Captain SM5  the ship had the NATO title of COMSUBMED, so during exercises they were drafted to the underground COMMCEN at Lascaris.

One of the highlights of the commission was that every year, and especially through the Mediterranean Fleet, was the Communications Ball, where all communicators from the ships and CinC Med Comms Staff, held their annual ball, quite an event John remembers.

Being single, John was part of the small crew who  brought the old girl home for the last time, (married personnel were drafted ashore prior to sailing for the UK). As regards to the passage home, there was a stopover in Gibraltar to fuel ship and have a spot of shore leave. On arrival at Pompey and flying the paying off pennant, John recalls that it was a sad occasion, naturally. Unfortunately John has no photographs of Ausonia at this time as he did not have a camera, (especially on a JRO’s pay in the 60’s).