The photographs within this collection have been very kindly supplied by Bruce Patterson and were taken by Bruce’s father, Duncan M. Patterson. ABS Duncan Patterson joined HMS Ausonia at Trincomalee on the 31st May 1946 and was part of the ships company who sailed the ship back to the UK, arriving in Plymouth on the 1st July 1946. The photographs form just a small part of Duncan’s wartime memoirs who first served at the Naval Air Station, HMS Gannet (Class 105) in 1943, then the aircraft carrier, HMS Colossus and finally on the Ausonia. 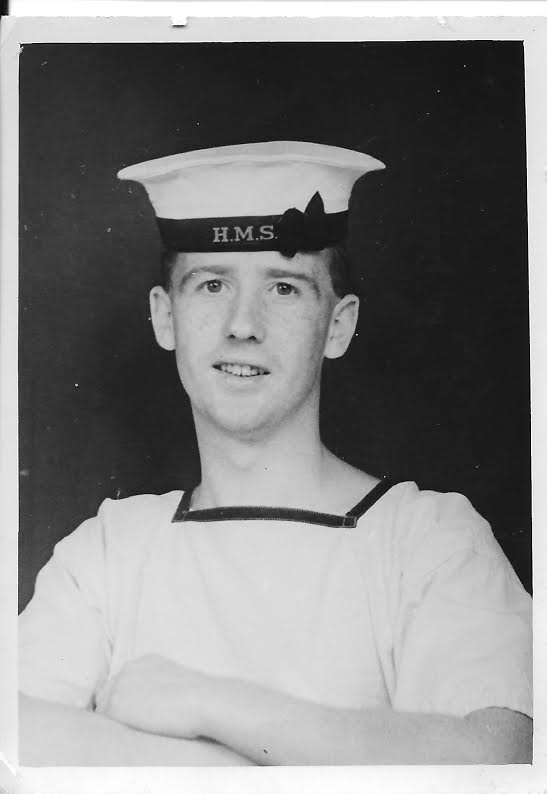 ABS Duncan Patterson. This photograph was taken in Colombo, Ceylon, sometime in October 1945. 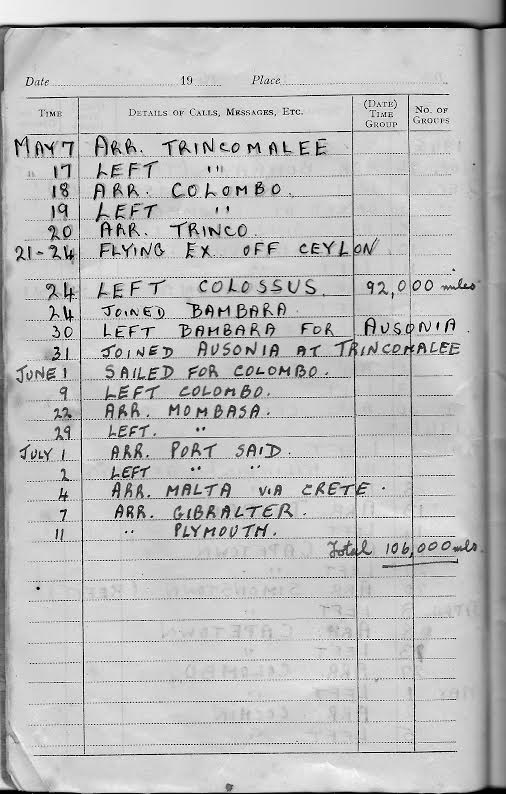 A page from Duncan Patterson’s naval logbook, which records his time on HMS Ausonia in 1946.

Amongst Duncan’s souvenirs is the script for the 09.00 ceremony of crossing the line on the 18th and 19th June 1946, on board HMS Ausonia. The text of the script is very feint and has a few over types and cross outs, and as it was printed on “Banda” copier ink/paper seventy years ago, is now very fragile. 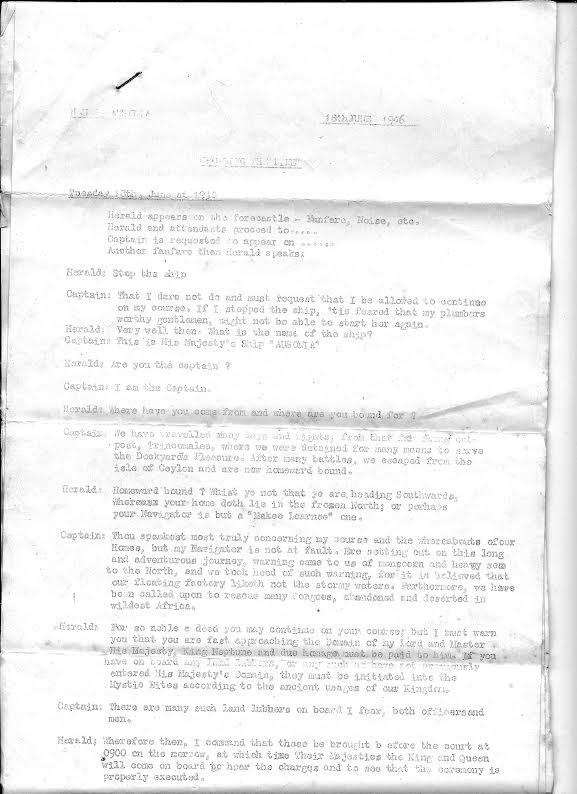 The front page of the original script for crossing the line on the 18th June 1946.

As the script identifies a number of participants by name and rank, Bruce has taken a lot of time and trouble to make a transcript of it and is confident that what follows is an accurate interpretation of the original:

Herald and attendants proceed to…..

Captain is requested to appear on …..

Another fanfare then Herald speaks.

Captain:  That I dare not do and must request that I be allowed to continue on my course.

If I stopped the ship, tis feared that my plumbers worthy gentlemen, might not be

able to start her again.

Herald:  Very well then.  What is the name of the ship?

Captain:  This is His Majesty’s Ship “AUSONIA”

Herald:  Are you the captain ?

Captain:  I am the Captain.

Herald:  Where have you come from and where are you bound for ?

Captain:  We have travelled many days and nights, from that far flung outpost, Trincomalee,

where we were detained for many moons to serve the Dockyards Pleasure.  After

many battles , we escaped from the isle of Ceylon and are now homeward bound.

Herald:  Homeward bound ?   Whist ye not that that ye are heading Southwards, whereas

your home doth lie in the frozen North; or perhaps your Navigator is but a

Captain: Thou speakest most truly concerning my course and the whereabouts of our homes,

but my Navigator is not at fault.  Ere setting out on this long and adventurous journey,

warning came to us of monsoon and heavy seas to the North, and we took heed of

such warning, for it is believed that our floating factory liketh not the stormy waters.

Furthermore, we have been called upon to rescue many Pongoes abandoned in

Herald:  For so noble a deed you may continue on your course: but I must warn you that you are

fast approaching the Domain of my Lord and Master His Majesty, King Neptune and due

homage must be paid to him.  If you have on board any land lubbers, or any such as have

not previously entered His Majesty’s Domain, they must be initiated into the Mystic Rites

according to the ancient usages of our Kingdom.

Captain: There are many such land lubbers on board I fear, both officers and men.

Herald:  Wherefore then, I command that these be brought before the court at 0900 on the

morrow, at which time Their Majesties the King and Queen will come on board to hear

the charges and to see that the ceremony is properly executed.

FANFARE FOR THE KING, QUEEN AND COURT AT THE REAR ON FORECASTLE

Captain:  Heil, good King and greetings to your lovely Amphitrite.  We of Ausonia do pray with due

humility for a right of way to pass through your Domain.  We are honoured at being

Neptune:  Many thanks most loyal and beloved of my shellbacks.  I will avail myself of your kind

Neptune: (to Captain):- For your good services I present you with the most noble Order of

the Rabbit,  And now to business,  Let the battle commence,

your peril to attend the court of His Most Exalted Nautical Majesty King Neptune, Lord

of All the Oceans, I now declare this court open and demand due respect and decorum

be paid to all land lubbers, dry idlers, longshoreman and loafers.  Let all who are

summoned report to this court promptly or the worst will befall them.

We have before us Your Majesty, one of the distinguished members of the His Majesty’s

Royal Naval Reserve, who has already previously visited your Domain, yet did he commit

men, even at the early hour of 0530 causing them much inconvenience, making them

scrub decks, queue in great masses outside bathrooms for long hours and without

breakfast.  I command the court to execute their duties.

Your Majesty, this most exalted officer did think fit to hold up the ship for self-indulgence

of the mystic rites of fishing, using for bait, the much needed Herring ration and so denying

the ships company the little bite they eat.  Gentlemen proceed.

pandering to his artistic temperament, in that he did paint their venerable bodies in a vivid

shade of green.  I adjudge that he be turned over to Our doctor for just punishment.

Your Majesty, we have here a royal Naval Officer, who, with great gusto and

vast amusement , did cause the greatest of inconvenience to the whole of the Ship’s Company

in that he did so little water whilst at sea.  I decree that here and now he should be given to

our most faithful Barber and Bears.

spuds, they being unfit for human consumption and was negligent for failing to supply on

Saturday, June 15th, at 1200 the allotted amount of Corned Dog and Pussers Peas to the

Did lose his razor thereby allowing fungus to grow upon his face, constituting

Sacrilege and a slight upon Your Majesty, a terrible crime for which he must suffer.

Whilst holding the exalted position of CALO, which being translated meaneth,

with the most ancient and corniest of films fit for furnace only.  Take him away.

Here before Your Majesty is a most grave offender.  In spite of much advertised

orders of water rationing he is strongly suspected of having a private dhobey firm, an awful,

‘orrible, outrageous crime, with which only your most noble Court can deal.

Your Majesty, we now have before us, one, Sub-Lieutenant Special Branch,

Admiralty, Bath. Rich. Who, being in full control of his emotions and actions, put the most

physical exercises every evening at the hour of 16:45.  We being loyal and honourable

citizens , do leave judgement and administration of the just law of the court of His Most

In that he did endeavour to make our Floating Factory a Whale Factory as per Whale Island.

Your Majesty, ‘tis a sorry sight we have before us now.  Ever since he joined the ship he

has acted in a bird-like manner, namely a Gannet, by eating such quantities of rationed food,

thereby causing his slim, sylph-like shape to change to prodigious, porpoise-like proportions, to

his messmates consternation and his own constipation.  Such a despicable character must be

given to our most honourable members of the Court to work upon his craven body.  To the bears.

presence into the place of one short of stature our beloved Sub. Lt Dwane.  This Sub. Lt Gould

having made so bold as to enter your Majesty’s Domain, must now be dealt with according to

Order of Rabbiter and be henceforth known as Warrant Rabbiter, R.N.

(1)  Did drink his messmates beer in Trincomalee Canteen.

Did eat too much nutty, thereby causing a shortage of amongst Loyal Subjects of the Royal

Is charged with wilful neglect, whereby he did Fil to remove solid matter from waste water,

working hours, in that he did fail to fulfil his promise to make one Suit Hanger using pussers

material and in pussers time.

Aphridoite and try to seduce her.

tables, thereby endangering the lives of his mess mates.

Did desert Asonia in Trinco in order to pursue the fairer sex, returning onboard after he had

achieved his object – and only just in time.

For you to stow away our pipe,

And learn a lesson once and for all

You know what we mean the Bosun’s Call

The BEARS will grab you

And we hope that this’ll

Take the tune out of your BLASTED whistle !

Did enter your Majesty’s domain as a non-swimmer after 7 years 9 months service in the R.N.

blue trousers were to be worn after 1800.  Thereby causing everyone great panic and alarm,

Is charged by the whole of 21 Mess, by constantly parting the fluff around his mouth making

noises contrary to the good order and conduct of the mess.

Is accused of purchasing the entire stock of Brylcream carried by the Ship’s Canteen.

Did carry out a series of Neck rolls into the goal at Hockey instead of placing the ball therein.

Is charged with being such a poor sport.

Did fail whilst conversing on the Forecastle, the subject being football, to make his voice

heard on the quarter deck so as ALL (R) ALL the Ship’s Company could hear, instead of just 99%.

Is charged with never having won an argument he has started.

Is charged with constant dripping.

Is being charged for being a gannet, and not giving the other gannets in his mess a chance.

Is charged with sticking his hypodermic needle in too far when administering injections.

LASTLY IF THERE BE ANY OTHER SUCH CREATURES WHO HAVE NOT PREVIOUSLY BEEN INITIATED,

LET THEM BE BROUGHT BEFORE COURT HERE AND NOW.

It is not entirely clear why Duncan would have kept the crossing the line ceremony script as he was not a participant himself, having already done this in HMS Colossus in 1945, but it is assumed that as a member of HMS Ausonia’s Telegraph/RT Department, he may have been one of the typists responsible for producing the script.

In addition to the script, the following 2” x 2” photographs record the ceremony. 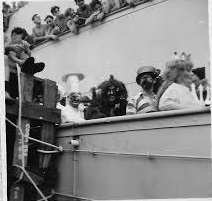 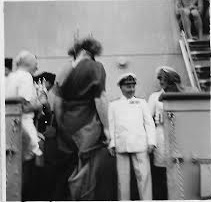 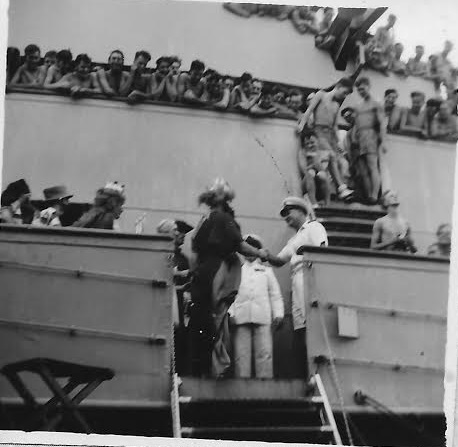 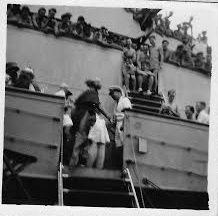 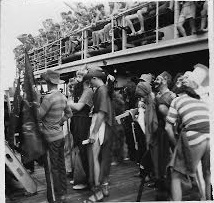 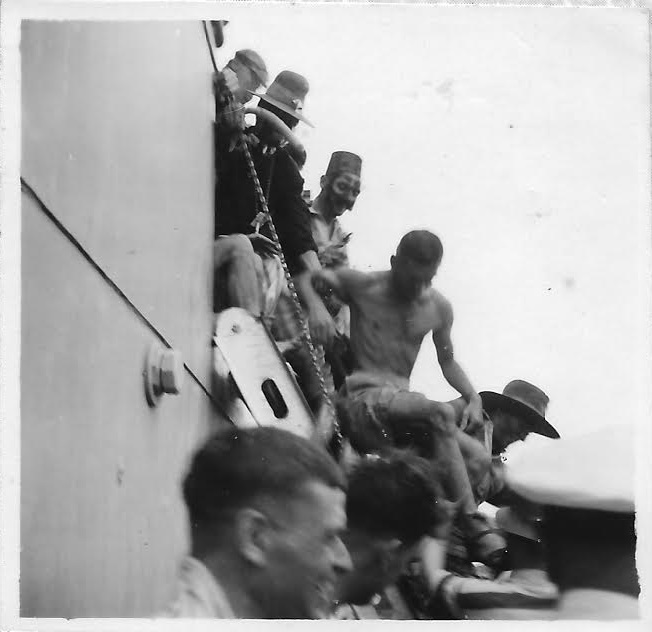 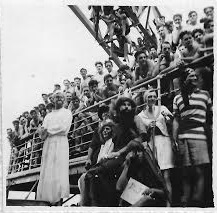 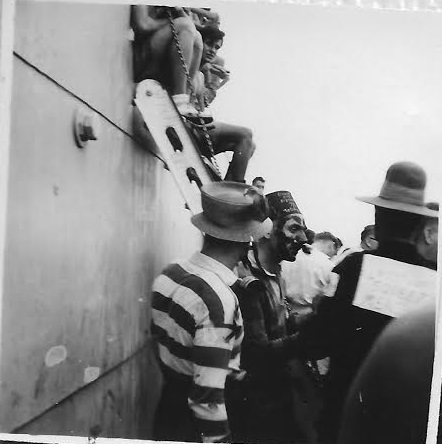 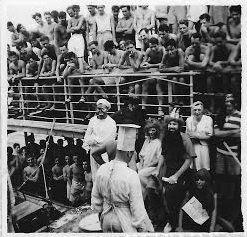 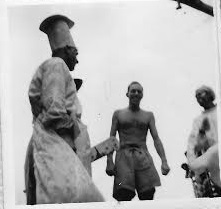 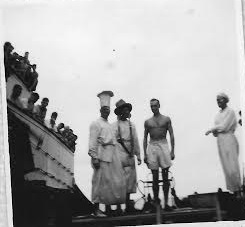 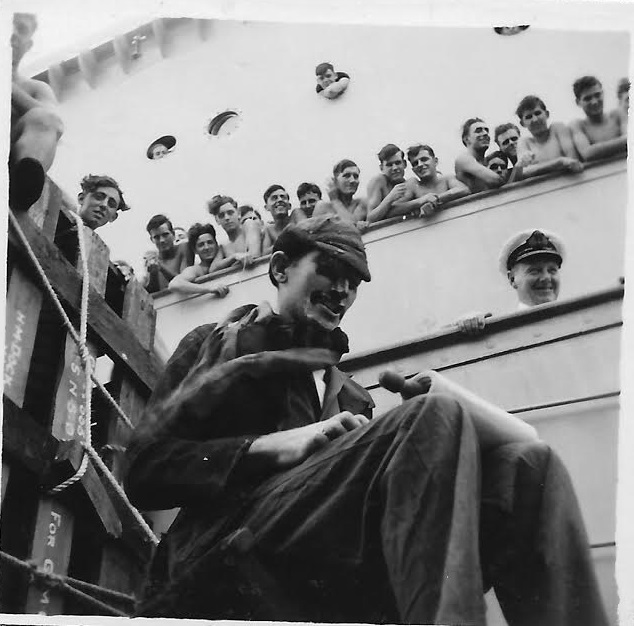 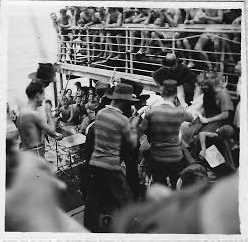 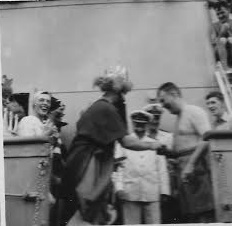 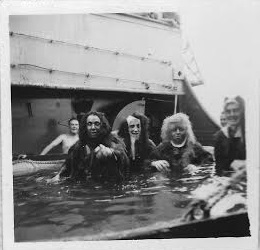 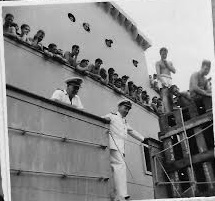 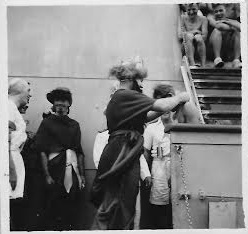