In the middle of February 1942, the  armed merchant cruiser HMS Ausonia sailed south to Bermuda where she carried out patrols in the Sargasso Sea but now, with the increasing need for repair and depot ships, the Ausonia’s role was about to change. The first two AMC’s to be earmarked for this role were the Ausonia and the Aurania. In March 1942 approval was given to convert the Ausonia into a repair ship and she left Bermuda on the 24th March for Portsmouth, arriving there on the 6th April at 6.24 pm. On the 20th April dockyard contractors started work on discharging the buoyant ballast and she paid off as an AMC on the 3rd May 1942.

Owing to the heavy demands on the dockyard services it was to be two years before the work was finished and when she commissioned again she would be almost unrecognisable as the former Cunard liner. When the work was finished in May 1944, HMS Ausonia was an extremely effective repair ship. She had a number of workshops including plate shop, welding, plumbers, smithy, coppersmiths, pattern makers and electrical along with her own drawing office. 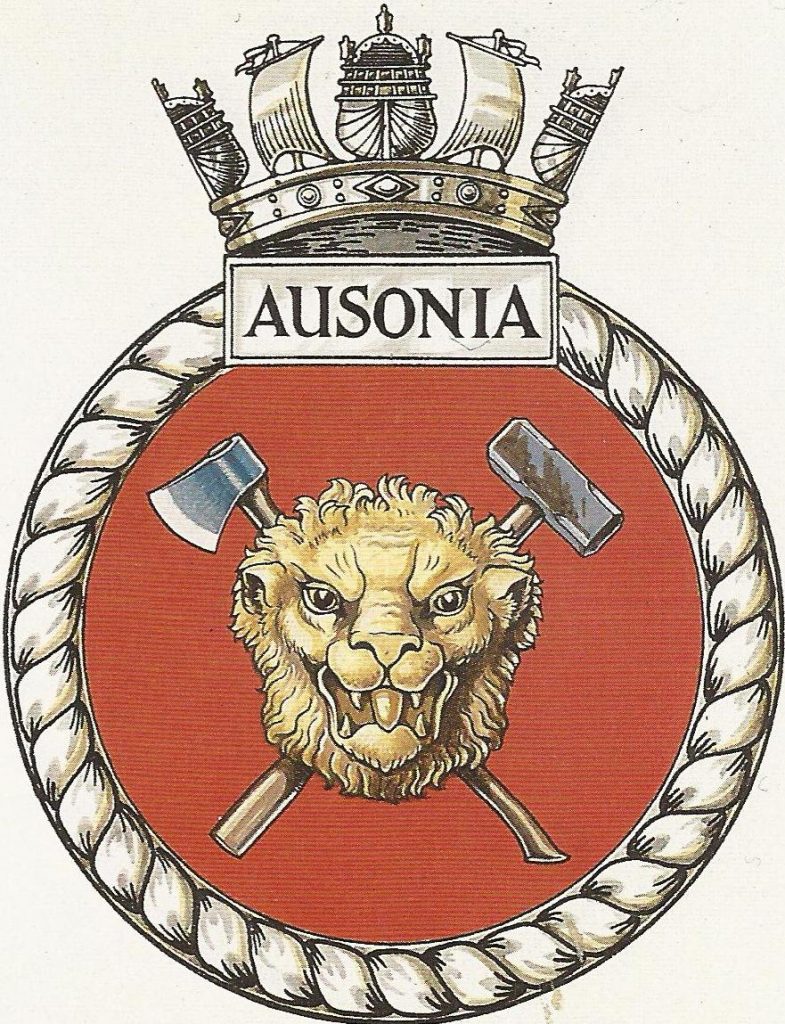 On re-commissioning in 1944, HMS Ausonia was issued with a ships crest. The crest consisted of a red blazon with a carpenter’s axe and a blacksmiths hammer in saltire, surmounted by a lions face in gold. The red field makes reference to the house flag and funnel colour of the Cunard Company, the lions face is taken from the Cunard badge. The axe and the hammer allude to the role of the ship.

She re-commissioned at Portsmouth on the 2nd May and one of her shipwrights, Charlie Baker, recalls joining her:

“On arrival at Portsmouth we were marched in a body through the dockyard. On turning a corner we saw the Ausonia for the first time. She had a very high freeboard and towered over adjacent buildings. Over the next few weeks work went on storing the ship and all the time there were air raids on both the city and the dockyard. On one occasion a mine exploded quite close to the ship”.

Charlie Baker continued to serve on Ausonia for the next two years while she was out in the Far East and then, years later as a civilian dockyard worker, he helped with her post war refit at the Chatham Dockyard. (Refer to the ‘Baker Collection’ in the Gallery section for Charlie’s photographs).

Charlie recalls: “Like most large RN ships the upper decks were wood secured to the mild steel decks, this adds insulation to the accommodation compartments below. The Ausonia had 5”x 2½” pitch pine timber on most of the main upper deck with bare steel left forward in the vicinity of the winch. The structure changed dramatically during refits; one such change was made during the 1944-46 period”.

“We had a very large derrick on the after boat deck, during post war refit this was removed and a large crane fitted in lieu as seen on Alaunia. Very large alterations were made converting from AMC to repair ship. One deck was cut out and the ships side plated in between the forward well deck and the after crane deck to accommodate the heavy plate shop.”

“On top of the superstructure, gun platforms, forward crane deck etc. was left bare steel, bridge wings were covered with wood, open bridge and monkey island had wood gratings. The wood decking was secured to the main steel structure with studs welded to the deck, a 12” gutter way was left adjacent to the ships side for drainage and also allowed the attachment of guard stanchions etc. to be secured. Between decks passage ways, workshop etc. were bare steel, accommodation offices etc. were painted with “Semtex” and the bathrooms etc. had unglazed tiles.”

At the end of May, HMS Ausonia sailed north to the Clyde for trials and at a time it was thought that she might support the naval forces in the Normandy landings, but this was not to be and on 11 June she sailed east of Suez for the war against Japan.

She was routed via the Suez Canal and arrived at Kilindini on the 12th July. She remained in the port for two months before steaming north to Aden where she stayed for eight months until May 1945, during which time her crew were given the task of repairing LCT’s for the Burma campaign. After a four week refit in Bombay, she sailed to Trincomalee where she arrived in June 1945 and remained there for the next 12 months. 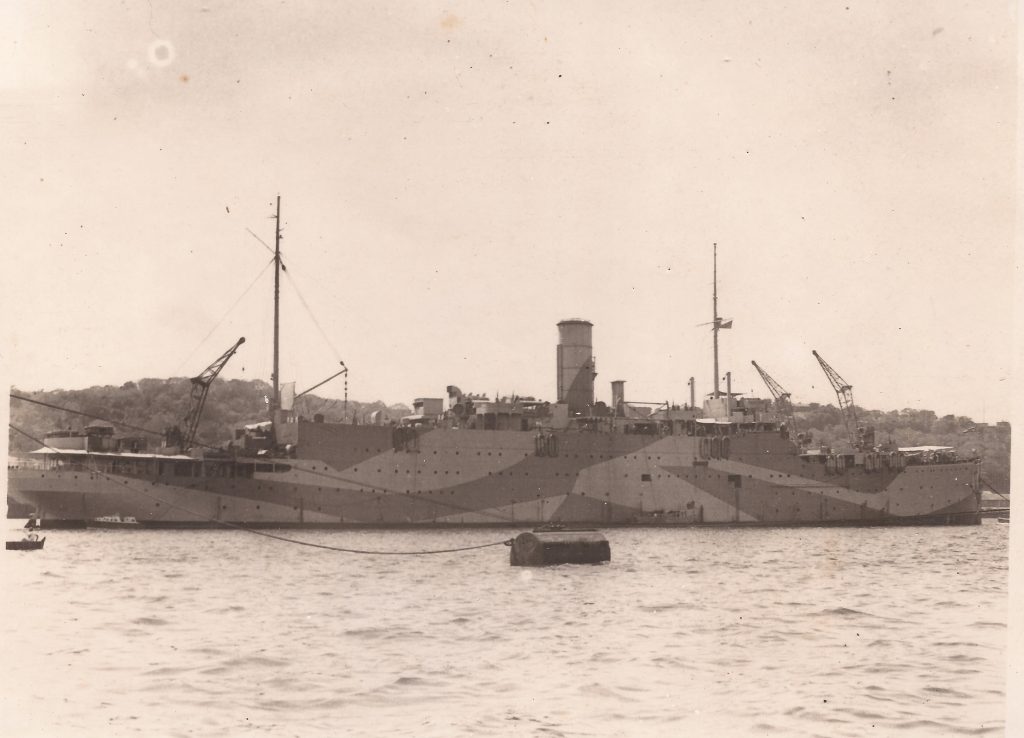 At Trincomalee she was berthed quite close to the wreck of the SS Sagaing, sunk by Japanese aircraft in April 1942. During her time there her crew carried out repairs to ships of the fleet with some repairs to vessels damaged by kamikaze attacks. At one time it was thought that the Ausonia would follow the fleet to Singapore for the re-occupation, because it was anticipated that all the dockyard equipment would be destroyed, but in the event she was not required.

Charlie Baker can recall soon after the end of the war, Ausonia rendered assistance to a French troopship on its way to Indo-China loaded with troops of the Foreign Legion. They had a seven year posting in front of them and would have served it but for the debacle of Dien Bien Phu. 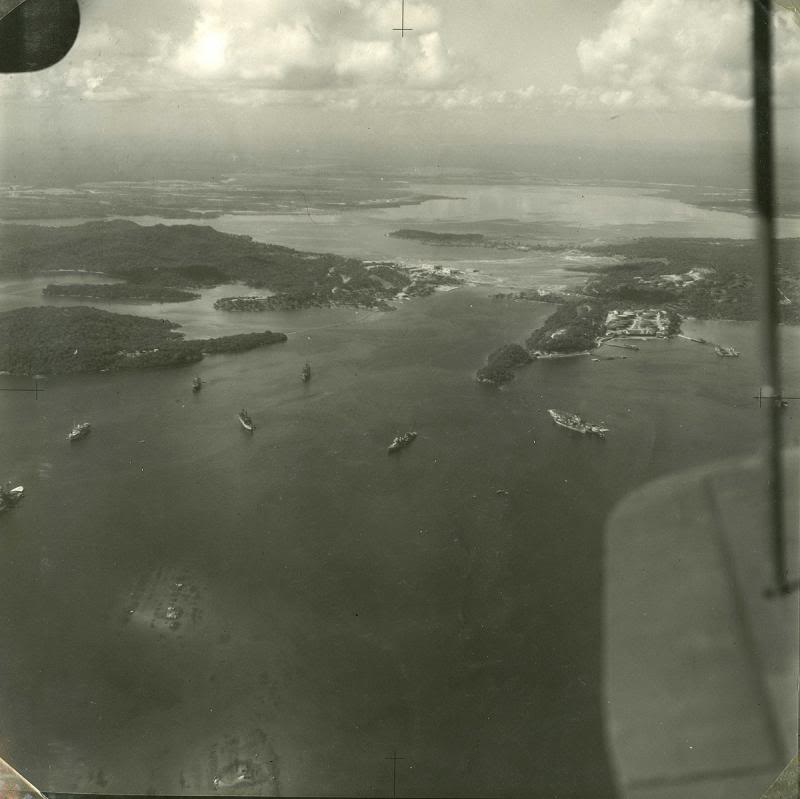 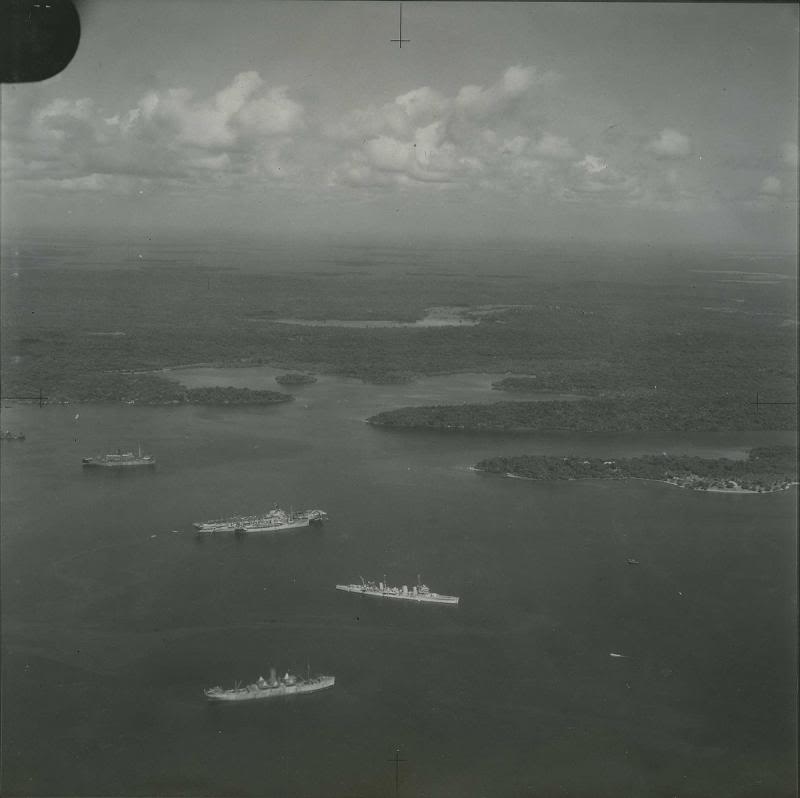 The fleet at Trincomalee, this aerial photograph taken in May 1945 shows HMS Ausonia in the top right hand corner, identified by her distinctive camouflage scheme. 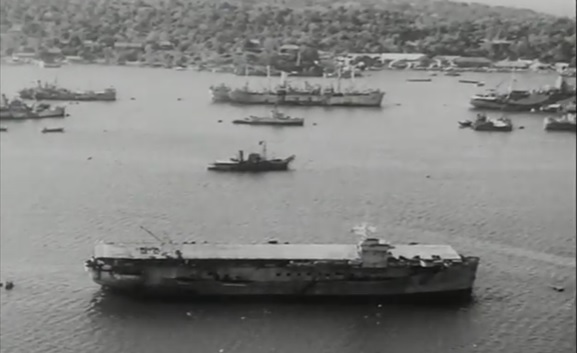 Another photograph taken at the same time, shows HMS Ausonia in the centre nearest the headland. 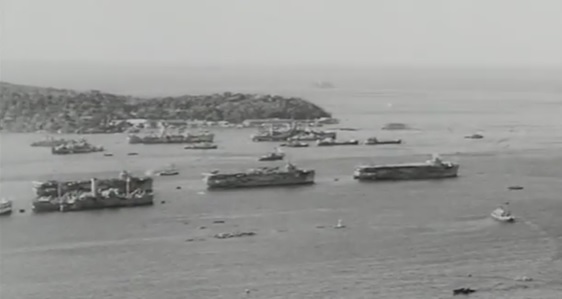 This aerial photograph taken of the fleet at Trincomalee in May 1945, shows HMS Wayland in the centre of the photograph, moored close to Great Sober Island. 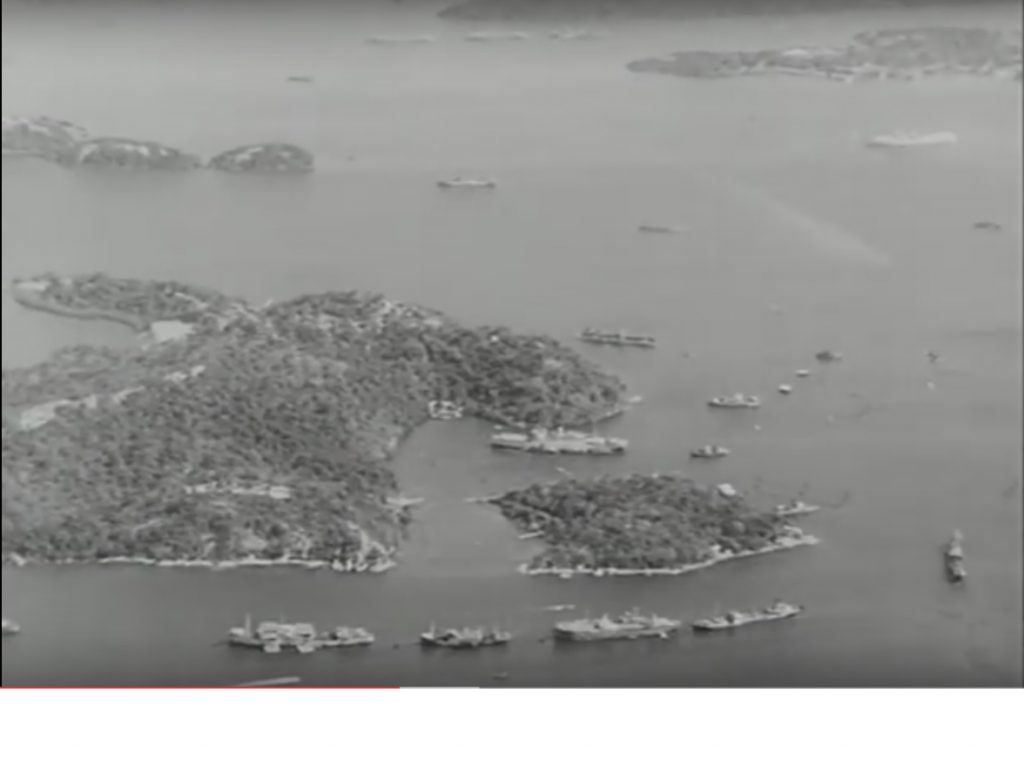 Another photograph taken of the fleet at Trincomalee in May 1945 showing the aircraft carriers HMS Stalker, HMS Shar and HMS Emperor. 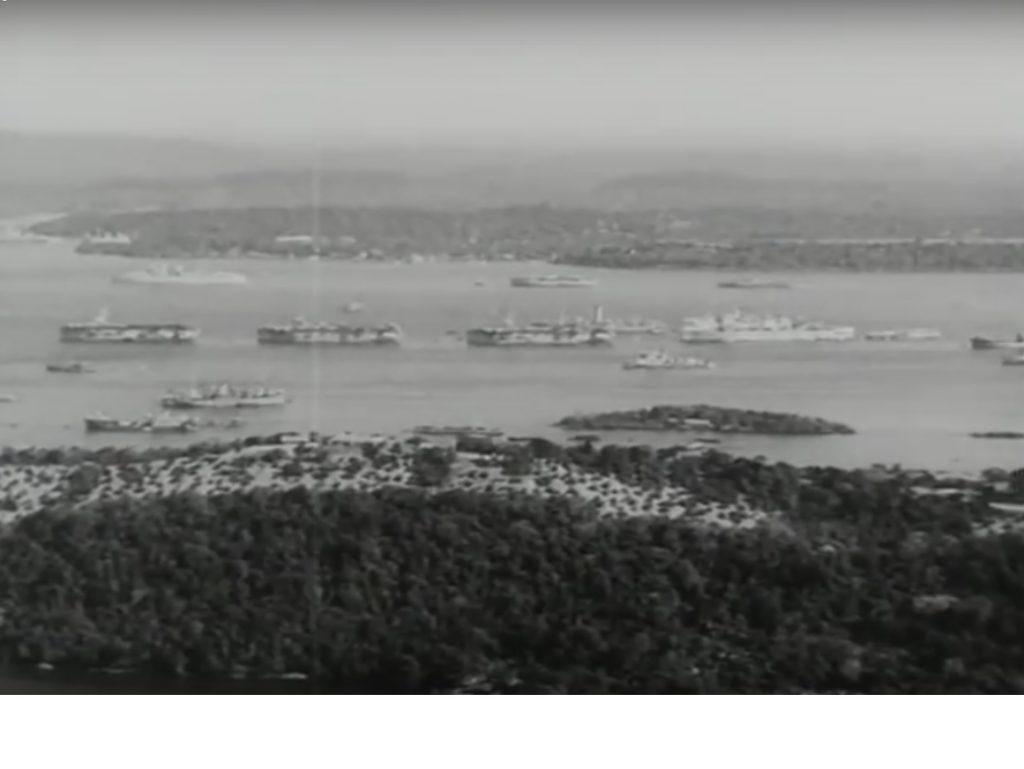 Printed in May 1974, this is the official 1947 Admiralty chart for the approaches to Trincomalee Harbour. The chart was produced from the survey carried out by the HM Surveying ship, Challenger in 1944. 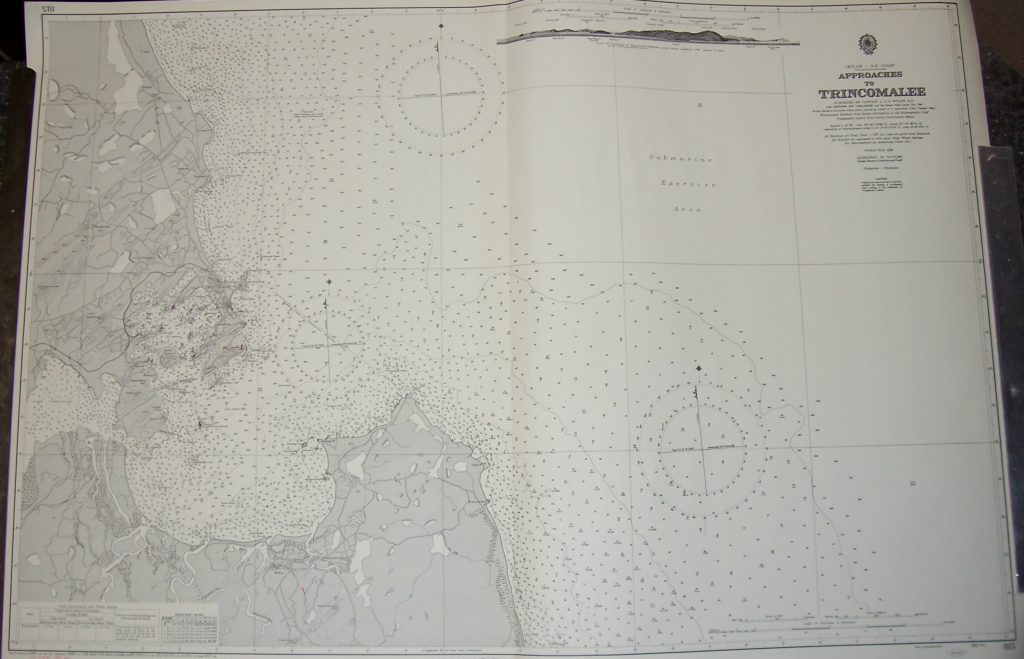 The chart, which was first published on the 2nd May 1947, is interesting as it also shows the anchorages and surrounding headlands for Trincomalee as they were in 1944. 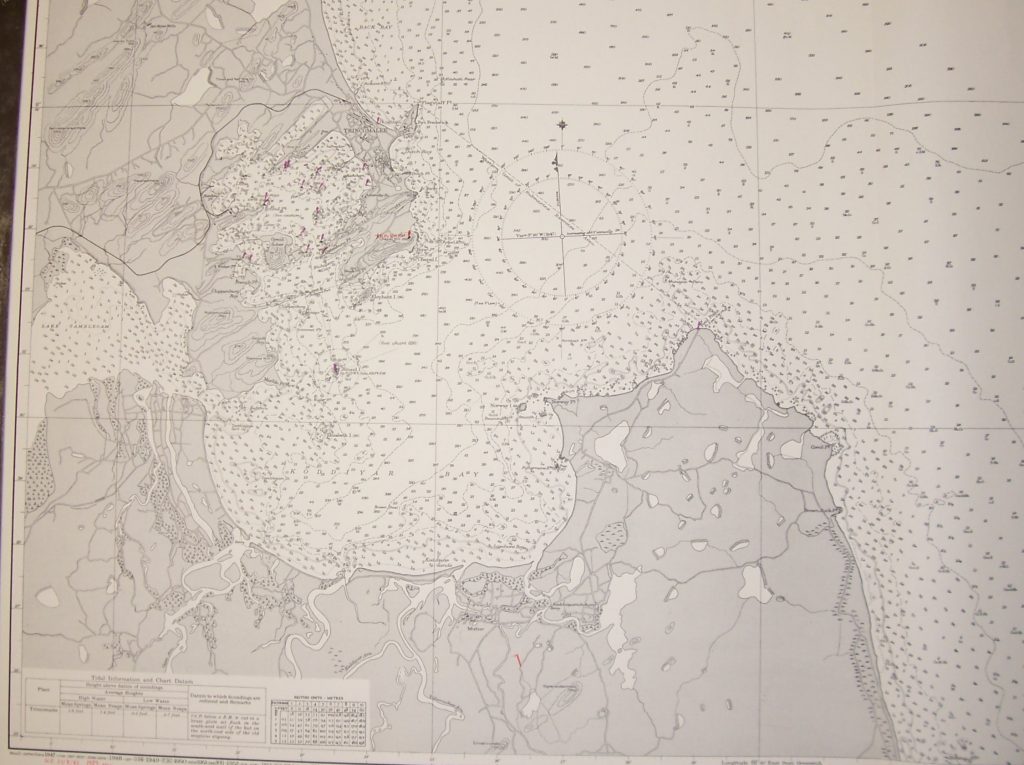 The chart also gives a view of the entrance to Trincomalee Harbour.

The chart shows the naval anchorages at Trincomalee Harbour. 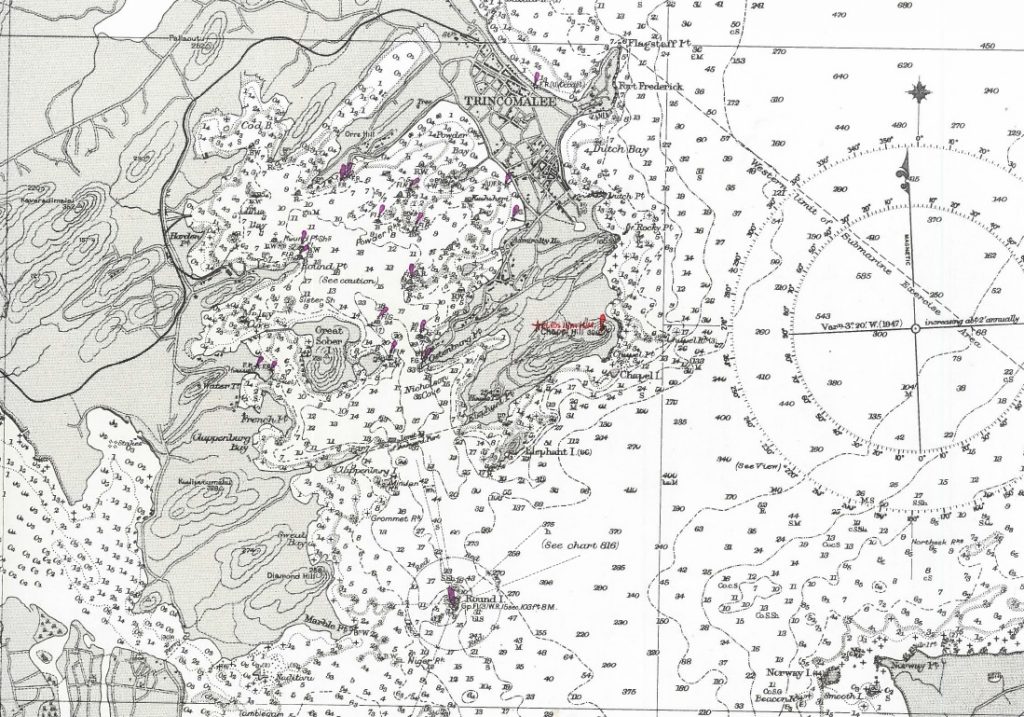 On the 14th June she left the East Indies fleet for home and returned to Greenock, where it became part of the reserve fleet. (Refer to HMS Ausonia Post WWII to continue with her history). 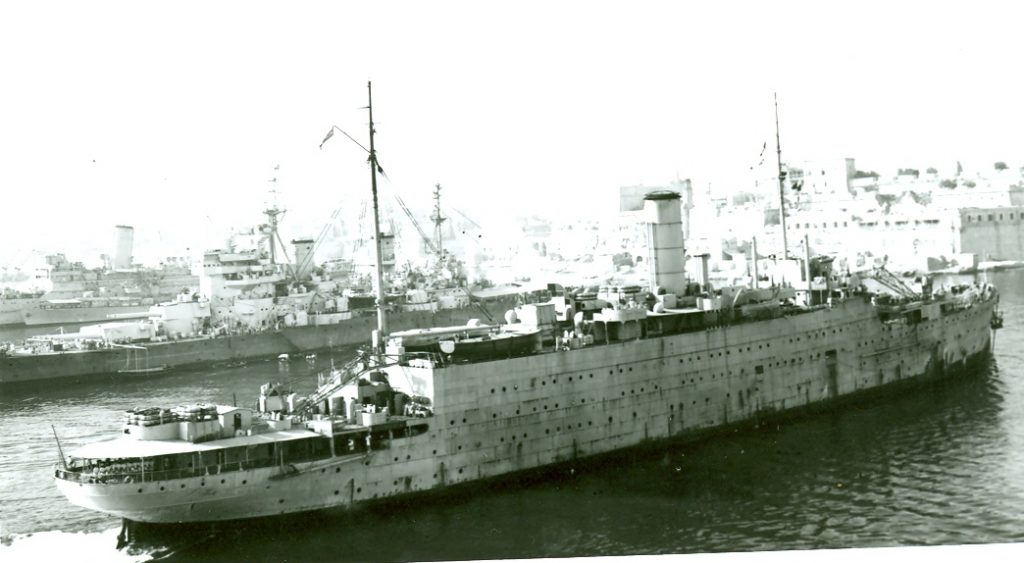 In 1944 the defeat of Nazi Germany was assured and the threat posed by the German Kriegsmarine had diminished. Tremendous efforts commenced in Britain to put together a great fleet of warships which were initially to be based in Sydney and which was of course destined to take part in the war against Japan. Some ships, particularly submarines, had for some years been operating from Fremantle in Western Australia and a fleet had also been operating from the naval base in Trincomalee in Ceylon. This was the British Eastern Fleet later renamed the British East Indies Fleet. Scores of thousands of officers and ratings were allocated to these ships and they began fitting out these vast fleets for operations in the Pacific and Indian Oceans.

The British Pacific Fleet or BPF as it became known commenced operations against Japan initially by bombardments and air attacks from aircraft carriers whilst still on their way to Australia. These attacks were upon the Japanese occupied Netherlands East Indies. For their operations against Okinawa and mainland Japan the Royal Navy operated an extensive Fleet Train. This consisted of dozens of supply ships, oil fuel tankers and floating workshops, also submarine depot ships and other assorted types of vessels. The need for this Fleet Train was necessitated by the immense distances from Sydney to the areas of operations.

The Fleet itself comprised 336 ships which included: 17 aircraft carriers – ranging from Fleet Carriers, Light Fleet Carriers to Escort Carriers, 4 Battleships, 10 cruisers, 40 destroyers, 18 Sloops, 13 Frigates, 29 Submarines, 35 Minesweepers and many other specialist type vessels such as Hospital Ships, Salvage ships, Landing ships, Armament Carriers and Fleet Repair Ships. These figures are for the BPF and do not include the East Indies Fleet, which whilst not as large as the BPF, was still was a very potent force comprising of many more Aircraft Carriers, Battleships, Cruisers, Destroyers, Submarines etc. and including HMS Ausonia, making the British contribution to the assault upon Japan, was very significant.

The BPF became part of the United States Navy’s Task Force 57 later being designated part of Task Force 37. The Fleet took part in operations against targets leading up to the final assault upon the mainland islands of Japan. These included the vicious battle for Okinawa during which all of the British Fleet carriers suffered hits by Japanese Kamikaze suicide planes, however unlike their US allies, whose carriers had wooden flight decks and were put completely out of action when hit, the British carriers had armored flight decks and following hasty repairs, the carriers were once again flying off strikes.
The British East Indies Fleet covered the area from the east coast of Africa to the west coast of Australia and played an important part in the recapture of Burma from the Japanese. Ships from this fleet took the surrender from Japanese garrisons throughout South East Asia from the Andaman Islands to Malaya and the Netherlands East Indies.

Both the British Pacific and East Indies Fleets became known in time as The Forgotten Fleets. In the euphoria of the victory in Europe the existence of these ships far from home was little known in Britain, and even today most know little of their contribution to the final victory over Japan.